Functions of Brain – What About You Need To Know

Functions of Brain – What About You Need To Know

Functions of Brain/The brain is one of the largest and most complex organs in our body; it is composed of billions of neurons that communicate together by forming numerous connections and synapses. The brain weight is different between men and women; The male brain weighs about 1336 grams, and the female comes in at about 1198 grams, but this difference in weight has shown no effect on the function or intelligence[rx]. There are three main divisions cerebrum, cerebellum, brain stem. The cerebrum consists of two cerebral hemispheres the outer layer called the cortex (gray matter) and the inner layer (white matter). There are four lobes in the cortex, the frontal lobe, parietal lobe, temporal lobe, occipital lobe.

The brain is the neurological center of an organism.

The brain is protected by the thick bones of the skull, suspended in cerebrospinal fluid, and isolated from the bloodstream by the blood-brain barrier.

The brain stem consists of the midbrain, pons, and medulla.

Each of the two hemispheres is divided into four separate lobes: the frontal (control of specialized motor control, learning, planning, and speech); parietal (control of somatic sensory functions); occipital (control of vision); and temporal lobes (control of hearing and some speech).

The seahorse-shaped hippocampus is responsible for memory.

The amygdala controls mood and emotions and is the center for danger identification and self-preservation.

The cortex is divided into three functional categories: sensory, motor, and association.

hippocampus – A part of the brain located inside the temporal lobe, consisting mainly of gray matter. It is a component of the limbic system and plays a role in memory and emotion.

amygdala – Located in the medial temporal lobe, this brain region is believed to play a key role in emotions such as fear and pleasure in both animals and humans.

cerebrum – The upper part of the brain, divided into the two cerebral hemispheres. In humans, it is the largest part of the brain and the seat of motor and sensory functions, as well as higher mental functions such as consciousness, thought, reason, emotion, and memory.

Lesions of the hypothalamus interfere with several vegetative functions and some behaviors, such as sexuality, combativeness, and hunger.

The human brain is the center of the human nervous system. It has the same general structure as the brains of other mammals but is larger than expected on the basis of body size when compared to other primates. Estimates for the number of neurons ( nerve cells) in the human brain range from 80 to 120 billion. Most of the expansion comes from the cerebral cortex, especially the frontal lobes, which are associated with executive functions such as self-control, planning, reasoning, and abstract thought. Despite being protected by the thick bones of the skull, suspended in cerebrospinal fluid, and isolated from the bloodstream by the blood-brain barrier, the human brain is susceptible to many types of damage and disease. This includes degenerative disorders such as Parkinson’s disease, multiple sclerosis, and Alzheimer’s disease. A number of psychiatric conditions, such as schizophrenia and depression, are thought to be associated with brain dysfunction, although the nature of such brain anomalies is not well understood.

The cerebral hemispheres form the largest part of the human brain and are situated above most other brain structures. They are covered with a cortical layer and have a convoluted topography. The cerebral cortex is essentially a sheet of neural tissue folded in a way that allows a large surface area to fit within the confines of the skull. Anatomists call each cortical fold a sulcus and the smooth area between folds a gyrus. As a rule, the smaller the cerebrum, the less convoluted the cortex. The cortex of a rat or mouse is almost completely smooth. The cortex of a dolphin or whale, on the other hand, is more convoluted than the cortex of a human. 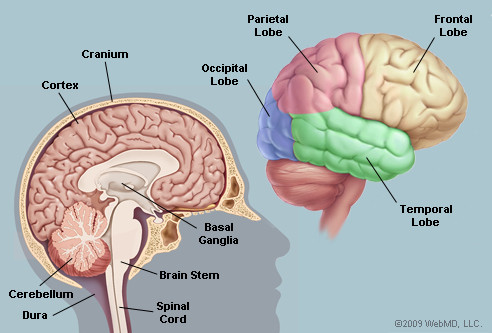 Diagram of Brain Regions: Demonstration of brain regions, including the four lobes and internal structures.

The left and right hemispheres of the cerebral cortex are nearly symmetrical. The hemispheres are connected by the corpus callosum, the largest white-matter structure in the brain. Anatomists conventionally divide each hemisphere into four lobes: the frontal (control of specialized motor control, learning, planning, and speech), parietal (control of somatic sensory functions), occipital (control of vision), and temporal lobes (control of hearing and some speech). The division into lobes does not actually arise from the structure of the cortex itself. Instead, each section is named after the skull bone that covers it. The borders between lobes are placed beneath the sutures that link the skull bones together. The only exception is the border between the frontal and parietal lobes, which is shifted backward from the corresponding suture to the central sulcus. This deep fold marks the line where the primary somatosensory cortex (main sensory receptive area for the sense of touch) and primary motor cortex (one of the principal areas of the brain involved in motor function) come together. Functionally, the cortex is commonly described as comprising three parts: sensory, motor, and association areas.

The cerebrum is attached to a stalk-like structure called the brain stem, which consists of the midbrain, pons, and medulla. At the rear of the brain beneath the cerebrum and behind the brainstem is the cerebellum. This structure has a horizontally furrowed surface with an appearance that is distinct from all other brain areas. These same structures are present in other mammals, although the cerebellum is not so large relative to the rest of the brain in non-human mammals.

Found deep in the temporal lobe, the seahorse-shaped hippocampus is responsible for memory. The amygdala is a small, almond-shaped structure deep inside the anteroinferior region of the temporal lobe. It plays an important role in the mediation and control of activities and feelings such as love, friendship, affection, and mood expression. The amygdala is the center for danger identification, a fundamental part of self-preservation.

The hypothalamus is a small part of the brain located just below the thalamus on both sides of the third ventricle. The hypothalamus also plays a role in emotion. Specifically, the lateral parts seem to be involved with pleasure and rage, while the medial part is linked to aversion, displeasure, and a tendency toward uncontrollably loud laughing. When the physical symptoms of emotion appear, the threat they pose returns to the limbic centers via the hypothalamus, then to the prefrontal nuclei, increasing anxiety.

It is the largest lobe, located in front of the cerebral hemispheres, and has significant functions for our body, and these are:

The ability to decide on something involves reasoning, learning, and creativity. A study conducted in 2012 proposed a new model to understand how the decision-making process occurs in the frontal lobe, specifically how the brain creates a new strategy to a new-recurrent situation or an open-ended environment, they called it the PROBE model.

There are typically three possible ways to adapt to a situation

The PROBE model illustrates that the brain can compare from three to four behavioral methods at most, then choose the best strategy for the situation.[rx]

The second most substantial portion occupies the middle cranial fossa and lies posterior to the frontal lobe and inferior to the parietal lobe. There are two surfaces, the lateral surface, and the medial surface.[rx]

The Anterior MTG is primarily involved in

The default mode network has a specific activity that exists naturally in the brain at rest. So if you are studying or engaging in a game or doing any other activity that demands you to stay focused or setting a particular goal this mode will be deactivated.

The Middle MTG has two functions

The Posterior MTG is thought to be part of the classical sensory language area.

The Sulcus MTG is involved in decoding gaze directions and in speech.

The medial temporal lobe (memory system) is still an active research area, more precisely the exact function of each structure in this lobe is currently being studied.[rx]

The occipital lobe is the smallest lobe in the cerebrum cortex, and it is located in the most posterior region of the brain, posterior to the parietal lobe and temporal lobe. The role of this lobe is visual processing and interpretation. Typically based on the function and structure, the visual cortex is divided into five areas (v1-v5). The primary visual cortex (v1, BA 17) is the first area that receives the visual information from the thalamus, and its located around the calcarine sulcus. The visual cortex receive, process, interpret the visual information, then this processed information is sent to the other regions of the brain to be further analyzed (example: inferior temporal lobe). This visual information helps us to determine, recognize, and compare the objects to each other.[rx]

The Brainstem – Anatomy, Parts and Functions

Which side of the brain is worse to have a stroke?Ministroke