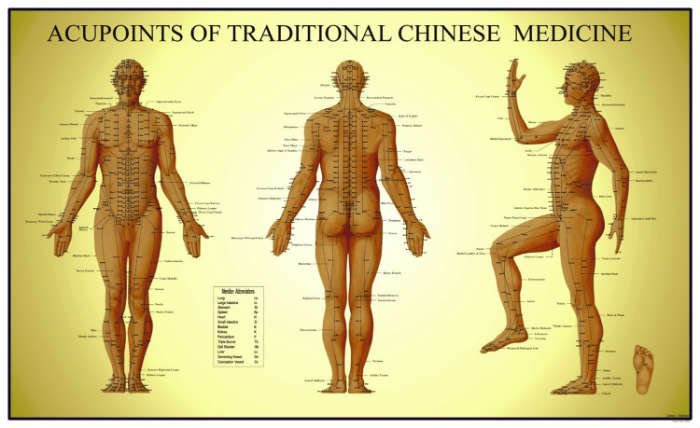 Acupuncture is a form of alternative medicine in which thin needles are inserted into the body.It is a key component of traditional Chinese medicine (TCM). TCM theory and practice are not based upon scientific knowledge,and acupuncture is a pseudoscience.There is a diverse range of acupuncture theories based on different philosophies,and techniques vary depending on the country.The method used in TCM is likely the most widespread in the United States.It is most often used for pain relief,though it is also used for a wide range of other conditions. Acupuncture is generally used only in combination with other forms of treatment.

Important elements of therapy are as follows

Research carried out in Germany has shown that acupuncture may help relieve tension headaches and migraines.

They list additional disorders that may benefit from acupuncture, but which require further scientific confirmation.

In 2003, the World Health Organization (WHO) listed a number of conditions in which they say acupuncture has been proven effective.

Case-controlled clinical studies have shown that acupuncture has been an effective treatment for the following diseases, symptoms or conditions

The following diseases, symptoms or conditions have limited but probable evidence to support the therapeutic use of acupuncture

They state that absolute contraindications to be

And relative contraindications to include

The most common mechanism of stimulation of acupuncture points employs penetration of the skin by thin metal needles, which are manipulated manually or the needle may be further stimulated by electrical stimulation (electroacupuncture).Acupuncture needles are typically made of stainless steel, making them flexible and preventing them from rusting or breaking. Needles are usually disposed of after each use to prevent contamination.Reusable needles when used should be sterilized between applications.Needles vary in length between 13 to 130 millimetres (0.51 to 5.12 in), with shorter needles used near the face and eyes, and longer needles in areas with thicker tissues; needle diameters vary from 0.16 mm (0.006 in) to 0.46 mm (0.018 in),with thicker needles used on more robust patients. Thinner needles may be flexible and require tubes for insertion. The tip of the needle should not be made too sharp to prevent breakage, although blunt needles cause more pain.

The skin is sterilized and needles are inserted, frequently with a plastic guide tube. Needles may be manipulated in various ways, including spinning, flicking, or moving up and down relative to the skin. Since most pain is felt in the superficial layers of the skin, a quick insertion of the needle is recommended.Often the needles are stimulated by hand in order to cause a dull, localized, aching sensation that is called de qi, as well as “needle grasp,” a tugging feeling felt by the acupuncturist and generated by a mechanical interaction between the needle and skin. Acupuncture can be painful.The skill level of the acupuncturist may influence how painful the needle insertion is, and a sufficiently skilled practitioner may be able to insert the needles without causing any pain.

To insert needles as quickly and painlessly as possible, one of the following techniques should be used

Acupuncture is thought to operate by

Angles Needles may be inserted in three ways

Once the needles are in place, and after Teh Chi has been obtained, the needles should be manipulated in one or more of the following ways

Stimulation of needles at acupuncture points using electrically powered or battery-operated units recently introduced into China is now coming into general use in the West. It offers a number of advantages over the traditional hand manipulation of needles. The degree of stimulation, for example, is easily controlled by the practitioner, and a more continuous, uniform, and relatively standardized degree of stimulation can be delivered than is possible with the manual method. It is also possible to obtain stronger stimulation. It is particularly helpful when lengthy treatments must be undertaken, as these have, in the past, tended to become highly fatiguing for the practitioner.

Many different kinds of power units are now readily available. These include stimulators using direct or alternating current, buzzer stimulators using induced current, and units with vacuum tubes or transistors. The most popular units are solid state stimulators that work on the principle of the electric doorbell and generate uniform, steady pulses. The most commonly used stimulators are 6- or 9-V battery-operated transistors, generating frequencies ranging from 120 to 2,400 pulses/min. The output potential of such a unit varies from 0 to 70 V. Intensity is generally 50 V for the positive portion of the pulse and 35 V for the negative portion of the pulse. The width of the positive pulse is 0.5 msec and that of the negative pulse, 0.25 msec. This type of stimulator can produce pulse frequencies of 120 to 2,400 cycles/min, to a maximum of 5 ,000 cycles for continuous wave, and frequencies as low as 14 to 26 cycles/min for interrupted or variable internal waves.

To use an electric stimulator, pairs of two, four, or six acupuncture points in close proximity to one another are chosen. When the needles have been inserted correctly, the positive electrode is connected to one of the paired needles and the negative electrode is connected to the other. The stimulator is then switched on and the current gradually increased. Optimum stimulation is achieved when the patient experiences either Teh Chi, or a tingling sensation, or is just below the threshold of tolerance.

This form of treatment is usually given over a 15- to 20-min period but can be extended when necessary, as in some cases of chronic muscle or joint pain for which 30-40 min is more appropriate. Continuous electric stimulation has been given safely for up to 4 or 5 hr, particularly during major surgery, with no known ill effects or complications developing. It should be avoided, however, in pregnant women and in patients with cardiac pacemaker implants for obvious reasons.

In addition to the usual complications said to be associated with acupuncture and described elsewhere in this book, electroacupuncture may cause unexpected skin reactions, bums, or nerve or muscle damage. Electric bums can occur because excessively high current is used or because the electrodes are spaced too closely together. Faulty connections may be a cause of electrocution, and high current may cause ventricular fibrillation and death. Battery-powered units are, therefore, the safest to use.

Whatever unit is selected, it must always be carefully and frequently tested before each use. Electrical output, voltage, polarity of the electrodes, and grounding provisions should also be meticulously and frequently checked out.

Strong stimulation –  is used when analgesic, sedative, or hypnotic effects are desired. Twirling and rotating needles rapidly while increasing the arc through which they are moved back and forth usually increases the strength of the stimulation at the point of acupuncture. Fifteen minutes is considered adequate time for treatment.

Weak stimulation – is used clinically for functional disturbances or in diseases in which emaciation and wasting occur. Once the needle is inserted and Teh Chi obtained, it should be left in place for 10-15 min with no further manipulation.

Medium stimulation – is the most usual type of stimulation used in acupuncture. Fifteen minutes is considered adequate time to obtain the maximum effect of acupuncture in most cases, and needles can be with-
drawn after this period.The foregoing applies to both manual and electric stimulation.

Needles can be easily removed by gentle twirling and quick withdrawal. If slight bleeding occurs, local pressure should be applied to the point for 1 min.

Bent Needles – A bent needle is usually the result of undue force being exerted on a needle and causing enough stress on it to change the angle of insertion beyond the limit of tolerance. This may happen if a patient shifts position suddenly, thus causing unexpected stress on one or more needles, or it may be a result of the acupuncturist using too much force to overcome unusual resistance while twirling or rotating needles during a treatment.

Bent needles should be withdrawn carefully by easing them out slowly and allowing for the angle of insertion and degree to which they have become bent; this will help to avoid breakage. Such needles should never be straightened out and used again but should be discarded immediately.

“Frozen” Needles – A needle may on occasion seem to be caught tightly in tissue and appear impossible to remove. This is usually due to muscle spasm around the acupuncture point and can be easily overcome. The patient should be calmed and reassured, and then slight vibration applied to the needle accompanied by gentle massage to the surrounding skin and muscles. This will relieve the muscle spasm and loosen the needle for easy removal.

A second needle inserted close to the “frozen” one may also help reduce muscle spasm. It is important to avoid haste or unnecessary force when removing such needles, otherwise bending or breakage may occur.

Broken Needles – Broken needles are caused by a variety of circumstances, including improper quality control that results in poor quality materials being used for needles, the handle or shaft becoming loose or worn, or, once again, the patient who shifts position during acupuncture placing too much stress on a needle and causing it to break.

Since prevention is always better than cure, all needles should be carefully examined for possible flaws and wear and tear before each use. However, once a needle does break while in a patient, a pair of forceps should be used to remove the broken fragments. Gentle pressure to the surrounding tissue may help force small pieces out. In rare instances, surgical intervention may be necessary.