Thyroid hormones are two hormones produced and released by the thyroid gland, namely triiodothyronine (T3) and thyroxine (T4). They are tyrosine-based hormones that are primarily responsible for the regulation of metabolism. T3 and T4 are partially composed of iodine.

Iodine is an essential trace element absorbed in the small intestine. It is an integral part of T3 and T4. Sources of iodine include iodized table salt, seafood, seaweed, and vegetables. Decreased iodine intake can cause iodine deficiency and decreased thyroid hormone synthesis. Iodine deficiency can cause cretinism, goiter, myxedema coma, and hypothyroidism.[rx][rx][rx]

TRH is a tropic hormone, meaning that it indirectly affects cells by stimulating other endocrine glands first. It binds to the TRH receptors on the anterior pituitary gland, causing a signal cascade mediated by a G-protein coupled receptor. Activation of Gq protein leads to the activation of phosphoinositide-specific phospholipase C (PLC). PLC hydrolyzes phosphatidylinositol 4,5-P(PIP) into inositol 1,4,5-triphosphate (IP) and 1,2-diacylglycerol (DAG). These second messengers mobilize intracellular calcium stores and activate protein kinase C, leading to downstream gene activation and transcription of TSH. TRH also has a non-tropic effect on the pituitary gland through the hypothalamic-pituitary-prolactin axis. As a non-tropic hormone, TRH directly stimulates lactotropic cells in the anterior pituitary to produce prolactin. Other substances like serotonin, gonadotropin-releasing hormone, and estrogen can also stimulate prolactin release. Prolactin can cause breast tissue growth and lactation.[rx]

TSH is released into the blood and binds to the thyroid-releasing hormone receptor (TSH-R) on the basolateral aspect of the thyroid follicular cell. The TSH-R is a Gs-protein coupled receptor, and its activation leads to the activation of adenylyl cyclase and intracellular levels of cAMP.  The increased cAMP activates protein kinase A (PKA). PKA phosphorylates different proteins to modify their functions. The five steps of thyroid synthesis are below: 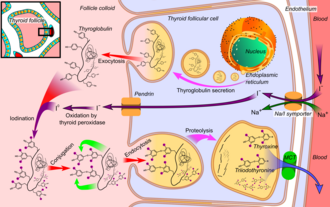 Synthesis of the thyroid hormones, as seen on an individual thyroid follicular cell[rx]

Thyroid hormones (T4 and T3) are produced by the follicular cells of the thyroid gland and are regulated by TSH made by the thyrotropes of the anterior pituitary gland. The effects of T4 in vivo are mediated via T3 (T4 is converted to T3 in target tissues). T3 is three to five times as active as T4.

Thyroxine (3,5,3′,5′-tetraiodothyronine) is produced by follicular cells of the thyroid gland. It is produced as the precursor thyroglobulin (this is not the same as thyroxine-binding globulin (TBG)), which is cleaved by enzymes to produce active T4.

The steps in this process are as follows:[rx]

The Function of Thyroid Hormone

The physiological effects of thyroid hormones are listed below

Thyroid hormones are lipophilic and circulate bound to the transport proteins. Only a fraction (approximately 0.2%) of the thyroid hormone (free T4) is unbound and active. Transporter proteins include thyroxine-binding globulin (TBG), transthyretin, and albumin. TBG transports the majority (two-thirds) of the T4, and transthyretin transports thyroxine and retinol. When it reaches its target site, T3 and T4 can dissociate from their binding protein to enter cells either by diffusion or carrier-mediated transport. Receptors for T3 bind are already bound to the DNA in the nucleus before the ligand binding. T3 or T4 then bind to nuclear alpha or beta receptors in the respective tissue and cause activation of transcription factors leading to the activation of certain genes and cell-specific responses. Thyroid hormones are degraded in the liver via sulfation and glucuronidation and excreted in the bile.[rx]

Thyroid receptors are transcription factors that can bind to both T3 and T4. However, they have a much higher affinity for T3. As a result, T4 is relatively inactive. Deiodinases convert T4 to active T3 or inactive reverse T3 (rT3). There are three types of deiodinases: type I, II, and III. Type I (DIO1) and II (DIO2) are located in the liver, kidneys, muscles, and thyroid glands. Type III (DIO3) deiodinases are located in the CNS and placenta. DIO1 and DIO2 convert T4 to the active form T3, and DIO3 converts T4 into inactive form rT3.[rx]

Patients with hypothyroidism may present with myxedema caused by decreased clearance of complex glycosaminoglycans and hyaluronic acids from the reticular layer of the dermis. Initially, the nonpitting edema is pretibial. As the state of hypothyroidism continues, patients can develop generalized edema.

Generalized hypermetabolism from hyperthyroidism causes increased Na+/K+-ATPase to promote thermogenesis. There is increased catecholamine secretion and, beta-adrenergic receptors are also upregulated in various tissues. As a result of the hyperadrenergic state, peripheral vascular resistance is decreased. In the heart, hyperthyroidism causes a decreased amount of phospholamban, a protein that normally decreases the affinity of calcium-ATPase for calcium in the sarcoplasmic reticulum. As a result of decreased phospholamban, there is increased Ca+ movement between the sarcoplasmic reticulum and cytosol, leading to increased contractility. Increased beta-receptors on the heart also lead to increased cardiac output.

Hypothalamus releases thyrotropin-releasing hormone (TRH) that stimulates the secretion of TSH in the pituitary gland. Increased free T4 and T3 inhibit the release of TRH and TSH through a negative feedback loop. As a result, T3 and T4 secretion and iodine uptake are reduced. Other hormones, such as somatostatin, glucocorticoids, and dopamine, also inhibit TSH production. Cold, stress, and exercise increase TRH release.

The initial tests of choice to screen for any thyroid abnormality are a TSH and free thyroxine (free T4) test. These determine whether the abnormality arises centrally from the thyroid gland (primary), peripherally from the pituitary (secondary), or hypothalamus (tertiary). In primary hypothyroidism is suspected, the thyroid gland is not releasing enough thyroid hormones. Therefore, TSH levels will be appropriately elevated, while free T4 levels will be lower. In primary hyperthyroidism, free T4 levels abnormally increased, and TSH levels will be appropriately decreased. Other lab tests such as TSH receptor antibodies or antibodies to thyroid peroxidase can help aid in diagnosing Graves disease or Hashimoto thyroiditis, respectively.[rx]

Antithyroid drugs that work in the thyroid gland [rx]