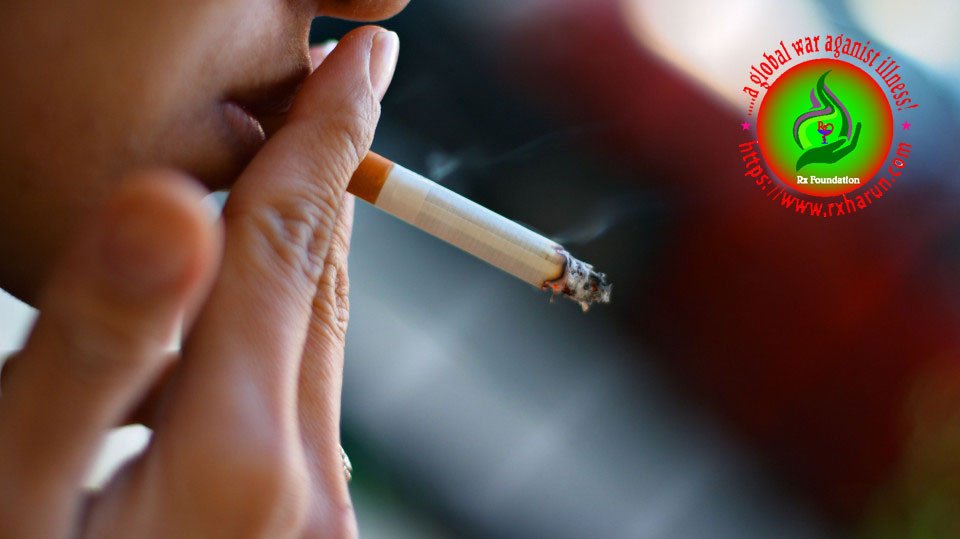 Cigarette Smoking is the practice of smoking tobacco and inhaling tobacco smoke consisting of particle and gaseous phases. A more broad definition may include simply taking tobacco smoke into the mouth, and then releasing it, as is done by some with tobacco pipes and cigars. The practice is believed to have begun as early as 5000–3000 BC in Mesoamerica and South America.[1] Tobacco was introduced to Eurasia in the late 17th century by European colonists, where it followed common trade routes. The practice encountered criticism from its first import into the Western world onwards but embedded itself in certain strata of a number of societies before becoming widespread upon the introduction of automated cigarette-rolling apparatus.

German scientists identified a link between smoking and lung cancer in the late 1920s, leading to the first anti-smoking campaign in modern history, albeit one truncated by the collapse of Nazi Germany at the end of World War II. In 1950, British researchers demonstrated a clear relationship between smoking and cancer. Evidence continued to mount in the 1980s, which prompted political action against the practice. Rates of consumption since 1965 in the developed world have either peaked or declined.

Many people begin to smoke cigarettes (or use smokeless tobacco) despite published statistics that show its negative impact on health. The adverse effects of smoking include nicotine addiction, increased risk of lung and other types of cancer, higher rates of arteriosclerosis (hardening of the arteries) and heart disease, as well as decreased life expectancy. Plus, there are the effects of secondhand smoke, which are not covered in this article.

Cigarettes contain dried tobacco leaves and flavorings, which include more than 4,000 chemicals. Some of these substances are harmless until burned and breathed. Cigarette smoke can be divided into two categories: (1) distinct particles and (2) gases. The following table is a partial list of the substances in cigarette smoke.

Cigarettes and the Body
Cigarette smoking adversely affects many of the body’s life-sustaining systems, as shown below.

The Spine and Cigarette Smoking

Bone is a living tissue dependent on the functions and support provided by the other body systems. When these systems are not able to perform normally, bone is unable to rebuild itself. The formation of bone is particularly influenced by physical exercise and hormonal activity, both of which are adversely affected by cigarette smoking.

Many smokers have less physical endurance than nonsmokers, mainly due to decreased lung function. Cigarette smoking reduces the amount of oxygen in the blood and increases the level of harmful substances, such as carbon monoxide. This, combined with the effects of smoking on the heart and blood vessels, can limit the benefits from physical activity.

In men and women, cigarette smoking is known to influence hormone function. Smoking increases estrogen loss in women who are perimenopausal or postmenopausal. This can result in a loss of bone density and lead to osteoporosis. Osteoporosis causes bones to lose strength, becoming more fragile. This silent disease is responsible for many spine and hip fractures in the United States.

Spinal fusion is a surgical procedure used to join bony segments of the spine (eg, vertebrae). In order for fusion to heal, new bone growth must occur, bridging between the spinal segments. Sometimes fusion is combined with another surgical technique termed spinal instrumentation. Instrumentation consists of different types of medically designed hardware such as rods, hooks, wires, and screws that are attached to the spine. These devices provide immediate stability and hold the spine in proper position while the fusion heals.

Spinal fusion (also termed arthrodesis) can be performed at the cervical, thoracic, or lumbar levels of the spine. It takes months to heal. Your doctor may order post-operative radiographs (x-rays) to monitor the progress of this healing.

The long-term success of many types of spinal surgery is dependent upon successful spinal fusion. In fact, if the fusion does not heal, spinal surgery may have to be repeated. A failed fusion is termed a nonunion or pseudoarthrosis. Spinal instrumentation, although very strong, may even break if nonunion occurs. Needless to say, spine surgeons try to minimize the risk of this happening by prescribing a bone growth stimulator.

Certain factors have been found to affect the success of spinal fusion. Some of these factors include the patient’s age, underlying medical conditions (eg, diabetes, osteoporosis), and cigarette smoking. There is growing evidence that cigarette smoking adversely affects fusion. Smoking disrupts the normal function of basic body systems that contribute to bone formation and growth. As mentioned previously, new bone growth is necessary for a fusion to heal.

Research has demonstrated that habitual cigarette smoking leads to the breakdown of the spine to such a degree that fusion is often less successful when compared to similar procedures performed on non-smokers.

Cigarette smoking compromises the immune system and the body’s other defense mechanisms, which can increase the patient’s susceptibility to post-operative infection.

All avobe mention drug are not available ,but bupropion are available

Bupropion should not be used for people who

How to take it

Side effects of this medicine may include

Varenicline (Chantix) helps with the craving for nicotine and withdrawal symptoms. It works in the brain to reduce the physical effects of nicotine. This means that even if you start smoking again after quitting, you will not get as much pleasure from it when you are taking this drug.

How to take it:

Most people tolerate varenicline well. Side effects are not common, but can include the following if they do occur:

NOTE: Use of this medicine is linked to an increased risk of heart attack and stroke.

The following medicines may help when other treatments have not worked. The benefits are less consistent, so they are considered second-line treatment.

How do I get rid of the cigarette smell in my car?