Smooth muscle is a type of muscle tissue that is used by various systems to apply pressure to vessels and organs. Smooth muscle is composed of sheets or strands of smooth muscle cells. These cells have fibers of actin and myosin which run through the cell and are supported by a framework of other proteins.

Smooth muscle cells (myocytes) are found in the walls of hollow organs, including the stomach, intestines, urinary bladder and uterus, and in the walls of passageways, such as the arteries and veins of the circulatory system, and the tracts of the respiratory, urinary, and reproductive systems. In the eyes, the ciliary muscle, a type of smooth muscle, dilate and contract the iris and alter the shape of the lens. In the skin, smooth muscle cells cause hair to stand erect in response to cold temperature or fear.[1]

Muscles are composed of long bundles of myocytes or muscle fibers.

Each myofibril is composed of numerous sarcomeres, the functional contracile region of a striated muscle. Sarcomeres are composed of myofilaments of myosin and actin, which interact using the sliding filament model and cross-bridge cycle to contract.

sarcoplasm: The cytoplasm of a myocyte.

sarcolemma: The cell membrane of a myocyte.

sarcomere: The functional contractile unit of the myofibril of a striated muscle.

Myocytes, sometimes called muscle fibers, form the bulk of muscle tissue. They are bound together by perimysium, a sheath of connective tissue, into bundles called fascicles, which are in turn bundled together to form muscle tissue. Myocytes contain numerous specialized cellular structures which facilitate their contraction and therefore that of the muscle as a whole.

The highly specialized structure of myocytes has led to the creation of terminology which differentiates them from generic animal cells.

Myocytes can be incredibly large, with diameters of up to 100 micrometers and lengths of up to 30 centimeters. The sarcoplasm is rich with glycogen and myoglobin, which store the glucose and oxygen required for energy generation, and is almost completely filled with myofibrils, the long fibers composed of myofilaments that facilitate muscle contraction.

Each myocyte contains multiple nuclei due to their derivation from multiple myoblasts, progenitor cells that give rise to myocytes. These myoblasts asre located to the periphery of the myocyte and flattened so as not to impact myocyte contraction.

Each myocyte can contain many thousands of myofibrils. Myofibrils run parallel to the myocyte and typically run for its entire length, attaching to the sarcolemma at either end. Each myofibril is surrounded by the sarcoplasmic reticulum, which is closely associated with the transverse tubules. The sarcoplasmic reticulum acts as a sink of Ca+ ions, which are released upon signalling from the transverse tubules. 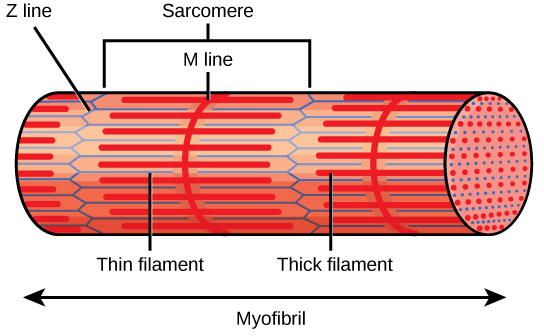 Sarcomere: The sarcomere is the functional contractile region of the myocyte, and defines the region of interaction between a set of thick and thin filaments.

Myofibrils are composed of long myofilaments of actin, myosin, and other associated proteins. These proteins are organized into regions termed sarcomeres, the functional contractile region of the myocyte. Within the sarcomere actin and myosin, myofilaments are interlaced with each other and slide over each other via the sliding filament model of contraction. The regular organization of these sarcomeres gives skeletal and cardiac muscle their distinctive striated appearance.

The structure of the smooth muscle actomyosin array is similar to striated muscle with several important differences:

A substantial portion of the volume of the cytoplasm of smooth muscle cells are taken up by the molecules myosin and actin,[rx] which together have the capability to contract, and, through a chain of tensile structures, make the entire smooth muscle tissue contract with them.

Different combinations of heavy and light chains allow for up to hundreds of different types of myosin structures, but it is unlikely that more than a few such combinations are actually used or permitted within a specific smooth muscle bed.[rx] In the uterus, a shift in myosin expression has been hypothesized to avail for changes in the directions of uterine contractions that are seen during the menstrual cycle.[rx]

The thin filaments that are part of the contractile machinery are predominantly composed of α- and γ-actin.[rx] Smooth muscle α-actin (alpha-actin) is the predominant isoform within the smooth muscle. There is also a lot of actin (mainly β-actin) that does not take part in contraction, but that polymerizes just below the plasma membrane in the presence of a contractile stimulant and may thereby assist in mechanical tension.[rx] Alpha actin is also expressed as distinct genetic isoforms such as smooth muscle, cardiac muscle, and skeletal muscle-specific isoforms of alpha-actin.[rx]

The ratio of actin to myosin is between 2:1[rx] and 10:1[rx] in smooth muscle. Conversely, from a mass ratio standpoint (as opposed to a molar ratio), myosin is the dominant protein in striated skeletal muscle with the actin to myosin ratio falling in the 1:2 to 1:3 range. A typical value for healthy young adults is 1:2.2.

Other proteins of the contractile apparatus

Smooth muscle does not contain the protein troponin; instead, calmodulin (which takes on the regulatory role in smooth muscle), caldesmon, and calponin are significant proteins expressed within the smooth muscle.

Smooth muscle is present in all of the organ systems below:

The innervation of the smooth musculature is of utmost complexity. It lies under the influence of the visceral nervous system and works autonomously at the same time.

Furthermore, it is regulated by:

Local changes (e.g. stretching) may have a stimulating or relaxing effect. In contrast to the skeletal musculature, the smooth musculature is contracted involuntarily.

Functionally, one differentiates between the single-unit and multi-unit type. The smooth muscle cells of the single-unit type are electrically connected by gap junctions and contract uniformly. This type of cells is found in the wall of internal organs and blood vessels (visceral smooth musculature). The multi-unit smooth cells are independent from each other and therefore need to be innervated individually allowing a more precise muscle control. They are found, among others, in the iris and hair erector muscles.