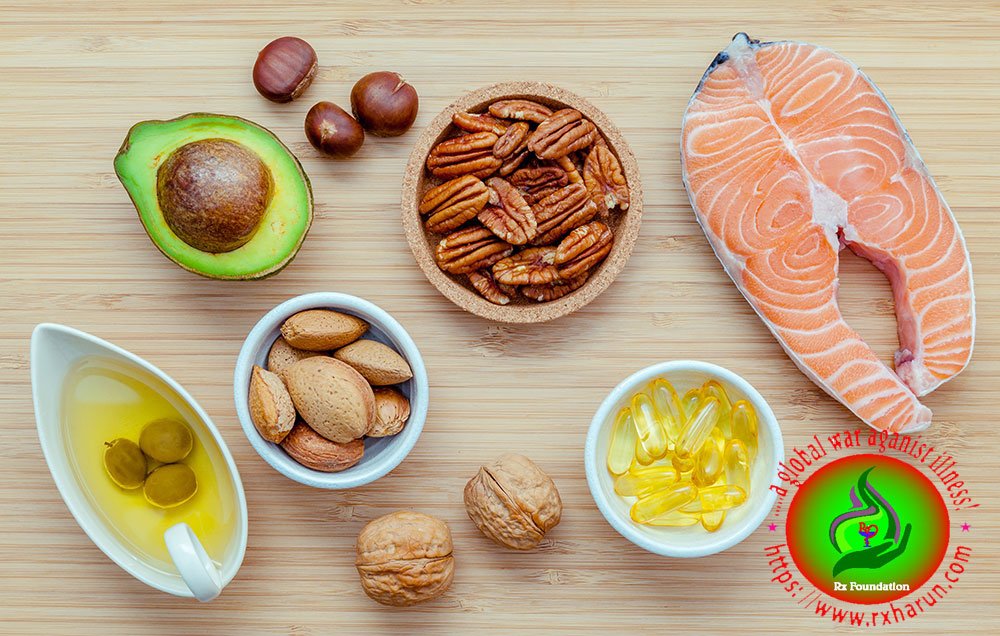 This plant-based omega-3 is found in green, leafy vegetables, flaxseeds, chia seeds and canola, walnut and soybean oils (although those rancid oils are not ones I generally recommend). ALA is known as a short-chain omega-3, meaning your body has to convert it into longer-chained EPA and DHA to synthesize it. This process is rather inefficient and only about one percent of the ALA you consume is converted to the long-chain version your body needs (although this percentage is slightly higher for women).

EPA is a 20-carbon fatty acid found in oily fish, algae oil and krill oil. Your body is able to synthesize this molecule in its original form. This, along with DHA, are the omega-3s your body needs in high quantities to achieve the benefits they offer.

This 22-carbon molecule is also found in oily fish, krill oil and algae oil. Your body will convert some DHA molecules back to EPA’s in order to keep them at fairly equal levels if you consume more DHA.

Good food sources of ALA are

Everyone else should eat no more than 7 ounces of these fish a week. Fish like wild trout and wild salmon are safer.While foods containing omega-3 fatty acids have health benefits, some — like oils and nuts — can be high in calories. So eat them in moderation.

The American Heart Association (AHA) recommends that healthy people who do not have heart disease eat some type of fatty fish at least twice a week. And they should include oils and foods rich in alpha-linolenic acid in their diet. Flaxseed, canola and soybean oils, and walnuts contain this acid.Food is the best way to get omega-3 fatty acids because food contains other healthy substances. For example, fish contains arginine, glutamine, and selenium. All of these may benefit the heart and blood vessels. Flaxseed and walnuts have substances that help lower total cholesterol.

The AHA offers this rundown on the omega-3 content of some fish, per 3-ounce serving:

There is no Recommended Dietary Allowance (RDA) for omega-3 fatty acids in general or for the individual omega-3s, i.e., EPA or DHA.

Most research studies have found that participants benefited from 500 to 1,000 milligrams of total omega-3s per day, so this is a basic dosage rule of thumb.

Experts generally recommend 500 to 1,000 mg of total omega-3s per day to maintain health and avoid deficiency, but therapeutic doses (to raise low levels or treat a health condition) up to 3 grams are generally considered safe.

However, some studies use much more than this.

Renowned neurology researcher Dr. Datis Kharrazian, author of Why Isn’t My Brain Working?, recommends 5 grams of fish oil daily for patients with issues like depression, bipolar disorder, or memory loss, with the emphasis on DHA rather than EPA.Note that when considering dosages, you should consider the total amounts of EPA and DHA, not the total amount of fish oil or krill oil. You can see if you are getting adequate omega-3s with this omega-3 quiz created by AlwaysOmega3s.com, a not-for-profit educational organization.

Side Effects of Omega-3 Fatty Acids

If you are currently being treated with any of the following medications, you should not use omega-3 fatty acid supplements, including EPA, DHA, and ALA, without first talking to your health care provider.

Blood-thinning medications –Omega-3 fatty acids may increase the effects of blood-thinning medications, including aspirin, warfarin (Coumadin), and clopedigrel (Plavix). Taking aspirin and omega-3 fatty acids may be helpful in some circumstances (such as in heart disease), but you should only take them together under the supervision of a provider.

Diabetes medications –Taking omega-3 fatty acid supplements may increase fasting blood sugar levels. Talk to your doctor if you are taking medications to lower blood sugar, such as glipizide (Glucotrol and Glucotrol XL), glyburide (Micronase or Diabeta), glucophage (Metformin), or insulin. Your doctor may need to increase your medication dose. These drugs include:

Cyclosporine–Cyclosporine is a medication given to people with organ transplants. Taking omega-3 fatty acids during cyclosporine (Sandimmune) therapy may reduce toxic side effects, such as high blood pressure and kidney damage, associated with this medication.

Nonsteroidal anti-inflammatory drugs (NSAIDs)–In an animal study, treatment with omega-3 fatty acids reduced the risk of ulcers from NSAIDs. NSAIDs include ibuprofen (Motrin or Advil) and naproxen (Aleve or Naprosyn). More research is needed to see whether omega-3 fatty acids would have the same effects in people.

Heart attacks and strokes are the world’s leading causes of death Decades ago, researchers observed that fish-eating communities had very low rates of these diseases. This was later found to be partially due to omega-3 consumption .Since then, omega-3 fatty acids have been shown to have numerous benefits for heart health .

For some people, omega-3s can also lower LDL (the “bad”) cholesterol. However, the evidence is mixed and some studies actually find increases in LDL.Interestingly, despite all these beneficial effects on heart disease risk factors, there is no convincing evidence that omega-3 supplements can prevent heart attacks or strokes. Many studies find no benefit.

Fish oil supplements can lower elevated triglyceride levels. Having high levels of this blood fat puts you at risk for heart disease.

Some researchers have found that cultures that eat foods with high levels of omega-3s have lower levels of depression. Fish oil also seems to boost the effects of antidepressants and may help the depressive symptoms of bipolar disorder.

DHA appears to be important for visual and neurological development in infants.

A diet high in omega-3s lowers inflammation, a key component in asthma. But more studies are needed to show if fish oil supplements improve lung function or cut the amount of medication a person needs to control the condition.

Some research suggests that omega-3s may help protect against Alzheimer’s disease and dementia, and have a positive effect on gradual memory loss linked to aging. But that’s not certain yet.

Population-based studies of groups of men suggest that a low-fat diet including omega-3 fatty acids (from fish or fish oil) may help prevent the development of prostate cancer.

Preliminary clinical evidence suggests that people with schizophrenia take omega-3 fatty acids, they experience an improvement in symptoms. However, more recent research found that EPA supplements were no better than placebo in improving symptoms of this condition.

In one clinical study, 13 people with sun sensitivity known as photo dermatitis showed less sensitivity to UV rays after taking fish oil supplements. However, topical sunscreens are much better at protecting the skin from damaging effects of the sun than omega-3 fatty acids. In another study of 40 people with psoriasis, those who took EPA with their prescription medications did better than those treated with the medications alone. However, a larger study of people with psoriasis found no benefit from fish oil.

Results are mixed as to whether omega-3 fatty acids can help reduce symptoms of Crohn disease and ulcerative colitis, two types of IBD. Some studies suggest that omega-3 fatty acids may help when added to medication, such as sulfasalazine (a standard medication for IBD). Others show no effect. More studies are needed. Fish oil supplements can cause side effects that are similar to symptoms of IBD (such as flatulence, belching, bloating, and diarrhea).

Several small studies suggest that EPA and fish oil may help reduce symptoms of lupus, an autoimmune condition characterized by fatigue and joint pain. However, two small studies found that fish oil had no effect on lupus nephritis (kidney disease caused by lupus, a frequent complication of the disease).

Some studies suggest that omega-3 fatty acids may help increase levels of calcium in the body and improve bone strength, although not all results were positive. Some studies also suggest that people who do not get enough of some essential fatty acids (particularly EPA and gamma-linolenic acid (GLA), an omega-6 fatty acid) are more likely to have bone loss than those with normal levels of these fatty acids. In a study of women over 65 with osteoporosis, those who took EPA and GLA supplements had less bone loss over 3 years than those who took placebo. Many of these women also experienced an increase in bone density.

Menstrual pain occurs in the lower abdomen and pelvis, and often radiates to the lower back and thighs.It can result in significant negative effects on a person’s quality of life.However, studies have repeatedly shown that women who consume the most omega-3s have milder menstrual pain .One study even found that an omega-3 supplement was more effective than ibuprofen in treating severe pain during menstruation

Good sleep is one of the foundations of optimal health.Studies show that sleep deprivation is linked to many diseases, including obesity, diabetes and depression .Low levels of omega-3 fatty acids are associated with sleep problems in children and obstructive sleep apnea in adults Low levels of DHA have also been linked to lower levels of the hormone melatonin, which helps you fall asleep .Studies in both children and adults have shown that supplementing with omega-3 increases the length and quality of sleep

Good For Your Skin

DHA is a structural component of the skin. It is responsible for the health of cell membranes, which make up a large part of skin.A healthy cell membrane results in soft, moist, supple and wrinkle-free skin.EPA also benefits the skin in several ways, including

Omega-3s can also protect your skin from sun damage. EPA helps block the release of substances that eat away at the collagen in your skin after sun exposure .

DO NOT take more than 3 grams daily of omega-3 fatty acids from capsules without the supervision of a health care provider, due to an increased risk of bleeding.